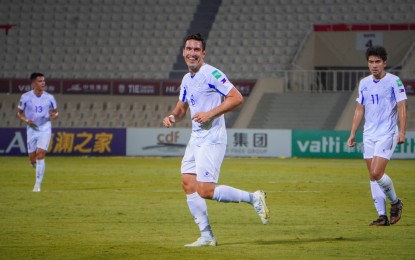 GOAL! Angel Guirado was all smiles after scoring a goal for the Philippine Azkals. The Azkals were held to draw by the Maldives, 1-1 at the second round of the joint FIFA World Cup and AFC Asian Cup Qualifiers at the Sharjah Stadium in the United Arab Emirates early Wednesday (June 16, 2021, Philippine time). (Photo courtesy of PFF)

MANILA – The Philippine Azkals failed to end their stint in the second round of the joint FIFA World Cup and AFC Asian Cup Qualifiers the way they would have wanted it as the Maldives held them to a 1-1 draw at the Sharjah Stadium in the United Arab Emirates early Wednesday (Philippine time).

The result, however, hardly mattered for the Azkals as they will finish third in Group A, regardless of what happens, thus securing a place in the third round of the ACQ.

The Azkals struck first in the 12th minute when Angel Guirado sent a volley from just outside the box past Mohamed Faisal and into the goal.

The Maldives, however, equalized in the 25th minute when Ali Fasir got past the Azkals’ backline and shot the ball to the right side of the goal, which Bernd Schipmann could not reach.

That turned out to be the Maldives’ brightest moment of the match as the team could not find its second goal the rest of the way, especially in the second half when the Azkals somehow dominated both ends of the pitch.

However, the Azkals also failed to complete the job and both teams had to settle for the stalemate.

With 11 points after eight matches, the Azkals set the record for the most points they gathered in the second round of the WCQ.

On the other hand, the draw derailed the chances of the Maldives, which finished its stint in fourth place with seven points, to directly enter the ACQ third round.

Following a 1-1 draw between Afghanistan, another fourth-placed team looking to enter the third round outright, and India in Group E action in Doha, the Maldives will now have to enter the playoff round for a chance to qualify in the third round of the ACQ.Hong Kong, also chasing to be among the four best fourth placers to enter the ACQ third round, was playing Bahrain as of posting. (PNA)