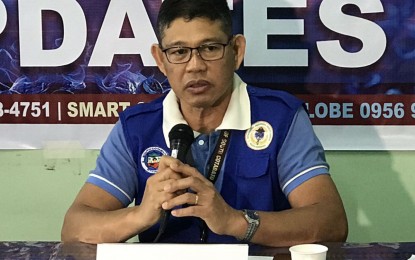 GENERAL SANTOS CITY – A health official warned on Sunday of a rapid upsurge in confirmed coronavirus disease 2019 (Covid-19) infections in South Cotabato province in the coming days due to the noted clustering of cases in various communities.

This, as the Department of Health in Region 12 (DOH-12) confirmed a total of 39 additional cases of the disease in South Cotabato, Sarangani, and this city on Saturday night, the highest daily increase for the area since March.

Sarangani and this city posted 14 new cases each, with three reported deaths, while South Cotabato added 11. Dr. Rogelio Aturdido Jr., head of the South Cotabato Integrated Provincial Health Office (IPHO), said they are closely monitoring the emergence of Covid-19 cases in parts of the province as these could possibly increase in the next few days.

Of the 11 new cases on Saturday, the IPHO’s surveillance report said seven were from Koronadal City, two from Polomolok town, and one each from Tupi and Sto. Nino towns.

Four of the patients, with two aged eight and 12 years old, were exposed to a confirmed case, three had visited the fishport complex here, two with travel history to Bulacan, and two still for “further investigation.”

Eight of them were symptomatic and confined in undisclosed hospitals while three were asymptomatic. Aturdido raised concern over the increasing infections in Koronadal City, which has four barangays already placed under localized lockdowns due to confirmed cases.

Nine residents of Koronadal City, including four personnel of the City Health Office, came out positive of Covid-19 on Friday. Aturdido said new transmissions have been recorded among family members of two patients from Barangays Sta. Cruz and San Isidro who earlier tested positive of the disease.

“There’s a possibility that some close contacts of the confirmed cases were not properly traced and this could cause a sudden increase of infections in our communities,” he said in a radio interview.

Aturdido reiterated the province is now considered a “special concern area” or “high risk” for Covid-19 due to the increasing local transmission and clustering of cases in some barangays. Four barangays in Polomolok and two in Surallah have recorded clustering of cases in the last two weeks. As of Sunday morning, the confirmed Covid-19 cases in South Cotabato province already reached a total of 161, with 81 recoveries.

Meanwhile, in Sarangani, 13 of its 14 new cases were recorded in Maasim town, with 12 traced to have had exposure to confirmed cases while one is still for “further investigation,” a report from the municipal government said. The lone case from Kiamba town had reported exposure to the fishport complex here, considered a “hotspot” for Covid-19.

In an advisory, the municipal information office of Alabel confirmed on Saturday night a 56-year-old female patient from the area expired around 4:30 p.m. while being treated for Covid-19 complications at the St. Elizabeth Hospital here.

In this city, the local government said in a report six of the 14 new cases recorded on Saturday were close contacts of confirmed patients while the history of exposure of eight others are still for “further investigation.”

Portions of Navarrete Street in Barangay Lagao and Purok 2 of Fishermen’s Village in Barangay Bula were placed under localized lockdown on Saturday and Sunday due to the emergence of confirmed Covid-19 cases.

This city has so far recorded a total of 108 Covid-19 cases and 49 recoveries, while Sarangani has 98 with 69 recoveries. (PNA)