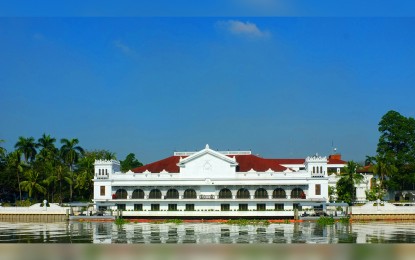 “The Palace expresses its deep condolences to the Revilla family for the loss of its patriarch, former senator Ramon Revilla, at age 93,” Presidential Spokesperson Harry Roque said in a press statement.

Senator Ramon “Bong” Revilla Jr. first announced the death of his 93-year-old father in a video posted on Facebook on Friday.

In a statement, the younger Revilla said his father succumbed to heart failure. The Revilla patriarch finished his bachelor’s degree in commerce at the Far Eastern University.

Revilla Sr. was a senior intelligence officer at the Customs Bureau from 1965 to 1972 before he became an award-winning actor.

He entered politics in 1992 after securing a seat at the Senate.

His two terms ended in 2004. Roque recognized Revilla Sr., popularly known as “Hari ng Agimat”, as a “pillar of the movie industry” before the latter entered politics.

As an elected senator, Revilla Sr. was recognized as the “Father of the Public Works Act for his authorship of Republic Act 8150 or the Public Works and Highways Infrastructure Program Act of 1995,” he said.

“We share the grief of the Revilla clan and as tributes pour to honor the life and legacy of this respected movie icon and public servant, we pray that the Almighty grant Mr. Revilla eternal repose,” Roque said.

In a separate statement, Presidential Communications Operations Office Secretary Martin Andanar also offered condolences to the family of the late senator. Andanar said the public would remember Revilla Sr. for his contributions to the Philippine movie industry.

He also honored the former senator for his exemplary public service. “His contributions will be remembered by people as among those who paved the way for movie and public works industries’ continued growth and development,” Andanar said.

“Our thoughts and prayers go out to the whole family. And we pray for the eternal repose of the soul of their patriarch.” (PNA)