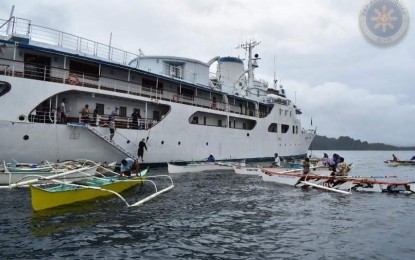 FLOATING HOSPITAL. Boats from Dinagat Islands' remote communities ferry residents to the BRP Ang Pangulo, the presidential yacht turned into a floating hospital, so they could avail of medical aid on Dec. 31, 2021. Aside from the medical mission, the ship also transported relief goods for the victims of Typhoon Odette. (Photo courtesy of the BRP Ang Pangulo Facebook Page)
FacebookTweetLinkedInEmailPrint

MANILA – The presidential yacht BRP Ang Pangulo that has been transformed into a floating hospital, has served patients from isolated areas in the Dinagat Islands, one of the provinces devastated by Typhoon Odette in December.

About 233 residents of six communities in the islands of Capaquian and Sibanac, who were treated by the medical team aboard the ship, benefited from the mission, the Philippine Navy said in a Facebook post on Tuesday.

“The isolated communities were also given food, clothing, hygiene kits, and activity kits for the children. In the last three days, 373 residents of the province were seen and served aboard ship,” the post read.

The BRP Ang Pangulo is part of the 26-ship flotilla deployed by the Navy to help communities battered by “Odette”.

The ship left Manila on December 19, carrying thousands of relief goods and other essential items intended for the affected population in Mindanao.Navy spokesperson Commander Benjo Negranza earlier said they use their resources to assist disaster-stricken areas to ensure the timely delivery of relief goods to the typhoon victims. (PNA)