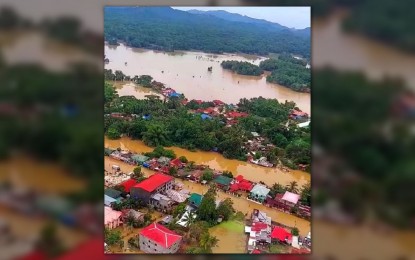 FLOODED. The aerial view of the flooded portion of the municipality of Sigma in Capiz due to "Agaton". The province has been declared under a state of calamity on Tuesday (April 19, 2022) by the Sangguniang Panlalawigan. (Photo courtesy of Speed Pelaez/PDRRMO FB page)
FacebookTweetEmailPrint

MANILA – South Korean President Moon Jae-in sent his condolences to the bereaved families of those killed during the onslaught of Tropical Storm Agaton early this month.

“I was deeply saddened to hear the unfortunate news that many lives were lost to (Tropical Storm) Megi that has recently hit the Philippines,” he said in a tweet Tuesday.

“On behalf of the Korean Government and people, I express condolences to the bereaved family in great sorrow and pain. My heart is also with those who have been displaced and lost a home due to the unexpected disaster as well as with the people of the Philippines sharing the grief.”

Moon expressed hope for the country’s fast recovery and the successful search for more survivors.

“I hope that (the) search for survivors and recovery work will proceed smoothly under your leadership so that the people of the Philippines can swiftly return to their peaceful life,” he said, addressing President Rodrigo Duterte.

Still reeling from the impact of the catastrophic Typhoon Odette in December 2021, several parts of the Visayas and Mindanao were battered anew by “Agaton”, which killed 212 people, injured eight, and left 132 missing.

Based on the latest data from the National Disaster Risk Reduction and Management Council, more than 2.26 million people in the Bicol region; Western, Central, and Eastern Visayas; Northern Mindanao; Davao region; Soccsksargen; Caraga; and the Bangsamoro region were affected by “Agaton”.