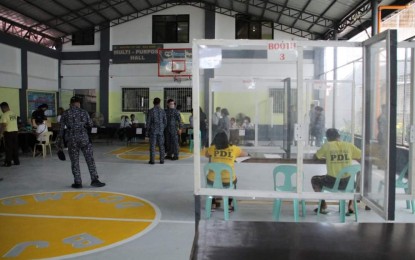 ELECTION DAY. Some persons deprived of liberty in the Bureau of Jail Management and Penology vote on Monday (May 9, 2022). The PDLs voted only for national candidates. (Photo courtesy of BJMP Dagupan)
FacebookTweetEmailPrint

DAGUPAN CITY – Over 500 persons deprived of liberty (PDLs) in the Bureau of Jail Management and Penology (BJMP) here exercised their right to suffrage on Monday.

In a press conference, Commission on Elections (Comelec) Dagupan election supervisor lawyer Michael Franks Sarmiento said there were seven special areas in the BJMP facility where the PDLs cast their votes.

“There were a total of 663 PDLs who qualified to vote as of February but some were released prior to the elections, about a hundred of them according to BJMP,” he said.

He added those who were released, however, may vote in the precincts where they were originally registered provided they bring their release order.

“The PDLs were only allowed to vote for national positions. If in case they mistakenly voted for local candidates, their ballots will not be fed to the vote-counting machine (VCM) instead, it will be manually counted at the central office,” he said.

Meanwhile, Sarmiento said the voting in the entire city as of 2 p.m. was generally peaceful given the augmentation forces from the Philippine National Police and the Armed Forces of the Philippines to ensure peaceful and orderly elections.

“We have replaced the VCM in East Central with the contingency machine while we tried to troubleshoot the one in Pugaro as we are reserving the other contingency VCM to other big barangays,” he said.

Sarmiento added they are expecting a higher percentage of voters turn-out as this election includes the presidential post.

Dagupan has a total of 194 clustered precincts and has the highest number of registered voters in the entire Ilocos Region. (PNA)