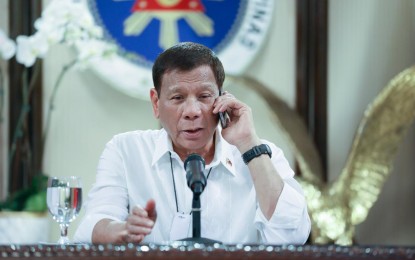 MANILA – President Rodrigo Duterte on Monday expressed gratitude to Japanese Prime Minister Shinzo Abe for his “valuable contribution” in strengthening ties between the Philippines and Japan.

In a statement from the Office of the President, Duterte conveyed his best wishes for Abe’s speedy and full recovery during a 25-minute phone conversation between the two leaders.

Abe announced his intention to resign from office due to health reasons on August 28. He is suffering from ulcerative colitis.

Duterte also lauded Abe for his leadership that paved the way for Japan’s proactive contribution to peace in the Asia Pacific, advancing regional security and the rule of law especially in the maritime commons.

Japan significantly contributed to the enhancement of the Philippines’ capabilities in defense and security, particularly in maritime domain awareness and law enforcement, he added.

He also thanked Abe for Japan’s pledge of one trillion yen from 2017 till 2022 for the government’s flagship projects, notably those under the “Build, Build, Build” program, the necessary support and momentum.

Filipinos, he said, are looking forward to the completion of the Metro Manila Subway project, the country’s first mass underground transport system.

He described the subway project as one that would serve as an “enduring symbol” of Philippine-Japan friendship and cooperation.

Duterte is hopeful that the two countries would sustain its robust economic through the immediate completion of the Philippines-Japan Economic Partnership Agreement General Review.

He also expressed appreciation for Japan’s support for the Philippines’ Covid-19 response, including the two loan agreements meant to boost the country’s capacity to restart the economy.

Abe, meanwhile, assured Duterte that Japan will continue to strengthen its Strategic Partnership with the Philippines.

He recalled warm memories of his visits to the Philippines, including being welcomed to the President’s private residence in January 2017.

The value of the Philippines-Japan Strategic Partnership and relations of “friends closer than brothers” was also recognized by both leaders.

Earlier, Abe said he would stay in office until his successor is chosen through a poll of selected members of the ruling Liberal Democratic Party.

The four-year term of Abe, Japan’s longest-serving prime minister, would have ended in 2021.