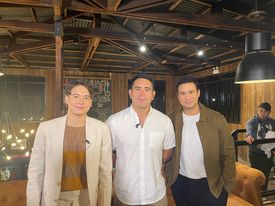 “A Family Affair” proves that siblings stand by each other amid turmoil as the Estrella brothers vow to start a new life together even without Cherry (Ivana Alawi).

In the show’s finale media conference, Gerald Anderson shared that he used his experiences with his real-life brother in the scenes, particularly when his character Paco reprimanded both Drew (Jameson Blake) and Seb (Jake Ejercito)for their mistakes.

Meanwhile, Sam Milby (Dave) is amazed by the brotherhood displayed by the Estrella brothers, like how Dave and Paco disregarded their differences to help Drew and Seb in their problems.

“Siguro yung kahit magkaaway kayo o may problema kayo, you will still be there for each other,” he said.

In the series, the four brothers try to start anew after the consecutive scandals and struggles they faced together. Drew decided to turn himself in to the police to pay for the crimes he committed. Seb did not continue his attempt to kill himself, while Dave is undergoing therapy after he suffered an accident with Cherry.

On the other hand, Cherry continued her plans to move away from the Estrellas even after learning about her pregnancy.

Will she and the Estrella brothers find peace in the end? Will Paco have the chance to meet his daughter?