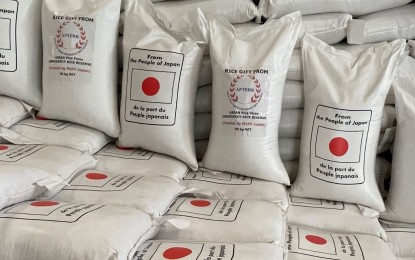 The rice will be delivered and distributed to Typhoon Odette-affected families in Cebu, Bohol, and Surigao del Norte as soon as the approval by the APTERR Council is given to NFA, according to a news release on Tuesday.

During the official inspection of the rice stocks, Koshikawa stressed that Japan fully commits to support the Philippines’ efforts to build back better from the typhoon damage.

“We hope these tons of rice will be delivered soon to nourish typhoon affected families,” he said.

APTERR is a regional cooperation that started in 2012 and aims to strengthen food security, poverty alleviation, and malnourishment eradication among its member countries.

To accomplish its common goal, the APTERR Parties have agreed to establish rice stocks to assist member countries in times of large-scale natural disasters.

In the Philippines, several thousand tons of stockpiled rice from Japan under APTERR were distributed to previous typhoon victims – Super Typhoon Yolanda in 2013, Typhoon Ineng in 2015, and Typhoon Jenny in 2019, to name a few.In 2020, Japan also provided 425 metric tons of rice to households affected by the Taal Volcano eruption and last year, pre-cooked rice was distributed to families affected by Covid-19 in Quezon City, Manila, and select parts of Bulacan and Cavite. (PR)