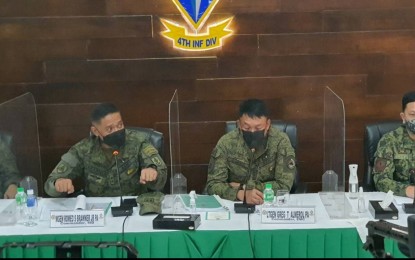 DEBUNKED. Maj. Gen Romeo Brawner Jr. (2nd from left), the Army’s 4th Infantry Division commander, debunks allegations that New People’s Army spokesperson Jorge Madlos was unarmed and ambushed while in transit on a motorcycle on Saturday (Oct. 30). Brawner said the Armed Forces of the Philippines respects and follows the International Humanitarian Law and will not resort to tactics used by communist armed groups. (PNA Photo by Nef Luczon)
FacebookTweetLinkedInEmailPrint

CAGAYAN DE ORO CITY – The Eastern Mindanao Command (Eastmincom) on Tuesday debunked claims of the Communist Party of the Philippines-New People’s Army-National Democratic Front (CPP-NPA-NDF) that one of its high-profile leaders killed by the military in Impasugong, Bukidnon was “unarmed” and “ambushed.”

Lt. Gen. Greg Almerol, the Eastmincom commander, in a statement, said NPA spokesperson and CPP-NDF leader Jorge “Ka Oris” Madlos was killed in a legitimate encounter, adding that the communist group’s claims “is nothing but a final attempt to save face using a tired trope” to discredit the accomplishment of the military unit.”

“The CPP’s official statement of lies is nothing new. It was nothing but an overused line that the CPP has been using for many years whenever they find themselves in a disadvantaged position,” Almerol said.

“If they must lie, they should at least be original to sound convincing. In this case, they have failed to persuade the people by using the same lie over and over again,” he added.

A statement from the NDF, purportedly signed by Myrna Sularte, alias “Maria Malaya,” circulated among media outlets on October 31, following the Army’s 4th Infantry Division (4ID) press conference in Malaybalay City, Bukidnon detailing the operations it made concerning the death of Madlos.

During the event, Maj. Gen. Romeo Brawner Jr., the 4ID commander, urged Sularte, the wife of Madlos, to surrender.

The NDF statement claimed Madlos was about to go for a medical check-up onboard a motorcycle unarmed when the government troopers staged the ambush.

Almerol said there is “not a single honest bone in the CPP leaders’ and members’ bodies.”

“They have been lying to the people for decades to advance their agenda of violence and rob the people of peace and development that they should have been enjoying in their communities many years ago,” he said.

During his visit at the 4ID headquarters here Monday, Almerol led the awarding of medals to the commanders and team leaders of the 403rd Infantry Brigade, including the 8th Infantry Battalion, Special Force Battalion, with the Philippine Air Force’s Technical Operations 10, as recognition for the continued anti-insurgency campaign that led to the death of Madlos.

He said the Eastmincom has a good roster of team members and leaders enacting their mandate well.

Meanwhile, Brawner also denied Madlos was unarmed and ambushed on October 30, saying the Armed Forces of the Philippines (AFP) has no business “in ambushing unarmed combatants especially riding on the motorcycle.”

“The AFP respects the International Humanitarian Law, and you never heard the AFP is conducting an ambush (operations),” he said.

Brawner said it is “the other way around,” where the CPP-NPA-NDF forces used anti-personnel mines to ambush police and military personnel, including civilians like in the case of civilian casualties Kieth Absalon and his uncle.

Absalon was a university football player who died in a landmine planted by the NPA guerilla forces in Masbate in June this year, with the CPP-NPA taking responsibility for the incident.

The CPP-NPA is listed as a terrorist organization by the United States, the European Union, the United Kingdom, Australia, Canada, New Zealand, and the Philippines. The NDF was formally designated as a terrorist organization by the Anti-Terrorism Council on June 23, 2021, citing it as “an integral and separate part” of the CPP-NPA created in April 1973.