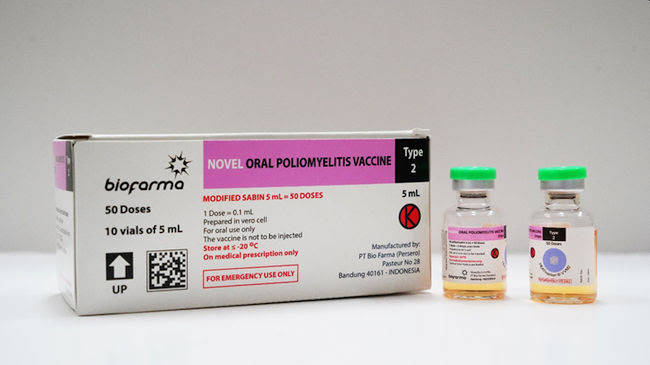 PT Bio Farma (Persero), the holding company for pharmaceutical state-owned enterprises (SOEs), will export its novel Oral Polio Vaccine type 2 (nOPV2) having secured a purchase contract with the United Nations Children’s Fund (UNICEF) for 2022 & 23. Under the contract, Bio Farma will export its oral polio vaccines based on purchase requests from UNICEF via multilateral contract agreement for the years 2022 & 23.

Indonesian State-Owned Enterprises (SOEs) Minister Erick Thohir has said, “In line with the theme of the Indonesian G20 Presidency, “Recover Together, Recover Stronger” , it is important for Indonesia’s state-owned enterprises to lead with concrete actions realized through strategic initiatives and large-scale transformations to create global impacts.”

Honesti Basyir, President Director of Bio Farma, said, “UNICEF procures nOPV2 under a multilateral supply agreement as part of a global effort to prevent the spread of polio disease. Bio Farma contributes its production to the global nOPV2 stockpile, which supports the global health industry, as we are able to manufacture stockpiles that fulfill world needs. In turn, we export to target countries following UNICEF’s requests under our multilateral agreement.”

The nOPV2 is the first new vaccine in the world, the result of 10 years of research by Bio Farma and others. nOPV2 is a modified version of mOPV2, which clinical trials show to be more genetically stable, making it significantly less likely to revert into a form which can cause paralysis in low immunity settings. It is a safe and effective vaccine that protects against polio and has successfully stopped cVDPV2 outbreaks in the past.

In November 2020, nOPV2 became the first vaccine recommended for use under the WHO’s Emergency Use Listing (EUL), to be able to roll out rapidly. As of June 2022, 370 million doses of nOPV2 had been administered in 20 countries including Benin, Cameroon, Congo, Djibouti, Egypt, Ethiopia, The Gambia, Guinea-Bissau, Liberia, Mauritania, Mozambique, Niger, Nigeria, Senegal, Sierra Leone, Tajikistan and Uganda.

According to Honesti, the nOPV2 vaccine is a result of collaboration between Bio Farma and several international research institutes, including Bill and Melinda Gates Foundation (BMGF), PATH, and the WHO. Bio Farma is now the main supplier of polio vaccines in the world, currently contributing 67% of the global polio vaccine stockpile, while Bio Farma’s laboratories have become the reference for sampling poliovirus strains from around the world.

Honesti said Bio Farma’s provision of vaccines is in line with a main pillar of Indonesia’s G20 Presidency (2021-22): Global Health Architecture. Through its G20 Presidency, Indonesia has showcased its success in controlling the Covid-19 pandemic and maintaining public health and steady economic growth through vaccination. Bio Farma has been a front-liner in the government-initiated vaccination program.

Bio Farma has been ready to mass-produce its IndoVac brand Covid-19 vaccine.* On September 24, an Emergency Use of Authorization (EUA) was granted by the Indonesian Food and Drug Authority (BPOM), following the halal certification from the Indonesian Ulema Council (LPPOM MUI), and the Halal Certification Agency (BPJPH).

With this EUA and certification, mass production of IndoVac is beginning immediately, as preparation work for the first batch was already in place at the company’s facility in Bandung. Bio Farma plans to increase its production capacity to 40 million doses next year, and to 100 million doses by 2024, given demand in the global markets.